Oberlin Then and Now: Nancy Squire and May Cottage 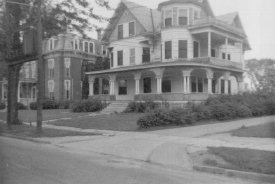 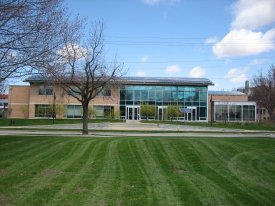 Under an agreement between the Trustees of the Ohio Kindergarten-Primary Training School and the Trustees of Oberlin College, authorized February 20, 1932, four cottages belonging to the Kindergarten Training School, May Cottage, Burroughs Cottage, Goodrich House, and Webster Hall, came into the possession of the College. The Actual transfer of the property took place in July, 1932. May Cottage, the largest of the four, consists of three parts: a west wing, formerly the John D. Carpenter home at 108 Elm Street, and named by the Kindergarten Association “May Cottage” in honor of Mrs. Emeline F.H. May; the east wing, previously owned by Mrs. John H. Angle, named by the Kindergarten Association the “Nancy Squire Cottage” in honor of Mrs. Nancy W. Squire; the two wings being connected by a three-story brick addition built by the Kindergarten Training School, containing on the first floor a large dining room. The entire plant constitutes the largest residence and dining hall unit belonging to the College [in 1936], with rooming accommodations for seventy-five women and dining facilities for one hundred additional persons. The date of the construction of the Carpenter house, constituting the west wing, was 1870; the Angle-Squire Cottage was built in 1870 and remodeled in 1908; the date of construction of the connecting portion was 1922. [May Cottage was used as a Freshman house beginning in 1938 and was demolished in 1968.]