Oberlin Then and Now: Spear Library and Laboratory 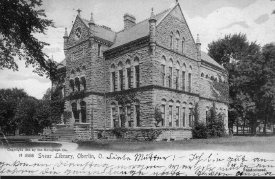 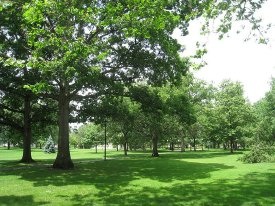 Spear Library was the gift of Mr. Charles C. Spear, of Pittsfield, Mass. The corner stone was laid October 6, 1884; it was dedicated November 2, 1885. The original cost was about $30,000. It was named in honor of the donor, who also established an endowment fund of $11,000 for the purchase of books, this fund being known as the Relief Holbrook Fund, in memory of the donor's wife, Mrs. Relief Holbrook Spear. From 1885 to 1908 the main use of this building was for college library purposes; but after the removal of the library to the New Carnegie Library in the summer of 1908, it was remodeled for the department of Zoology. Spear Library-Laboratory was located on the east side of the campus near the center. Messers, Weary and Kramer, of Akron, were the architects. The building was constructed by Messers, Parker and Kinney, of Norwalk. Its dimensions were 70 by 70 feet. Spear Library-Laboratory was torn down by the College in the fall of 1927 to clear the campus of buildings, in accordance with the contract with the Trustees of the Hall Estate.