Oberlin Then and Now: French Hall 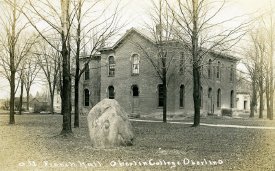 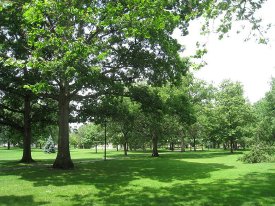 The construction of French Hall was begun in 1867, and the building was completed in 1868. It was a two-story brick building, located on the west side of the campus, near the south end, named in honor of Mr. Charles French, of Cleveland, Ohio, who gave $5,000 toward the construction of the building. French Hall and Society Hall were built at the same time at a total cost of $19,000. French Hall originally contained three recitation rooms on the first floor; on the second there were rooms for the department of Drawing and Painting, and for the department of Natural Philosophy. The department of Drawing and Painting remained in this building until 1885, when it was possible to give it additional space in Society Hall, owing to the removal from Society Hall of the College and U.L.A. libraries. In 1887, when Peters Hall was completed, French Hall was used for recitation purposes for the College of Arts and Sciences. It was torn down in 1927 in accordance with a contract with the Trustees of the Hall Estate to clear the Campus of all buildings.