Oberlin Then and Now: Fletcher's House 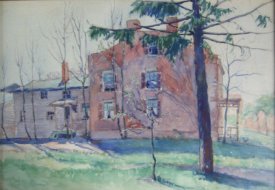 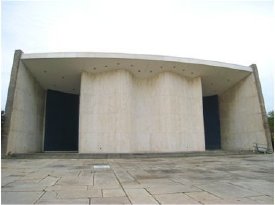 With the razing of the brick home on North Main street, just south of the Art building, another one of Oberlin's old landmarks passes away. It was probably built by Nathan P. Fletcher, who in 1836 bough the lot (No. 17) from Titus Street and Philomela Hughes of New Haven, Connecticut through their agent, Eliphalet Redington, of Amherst, Ohio. It was the first brick house erected in Oberlin and the brick was hauled by a team from Elyria over almost impassable roads. The road was through the forest, and trees and branches were laid down to keep the teams from miring. The house was curiously constructed, in New England style probably, with cubby-holes and corners in unexpected places on the second floor. The floors in the back store rooms were made of very wide boards. On the front door was an old fashioned lock which was replaced by a modern lock when the college came into possession of the property in 1912, and this is now preserved as a relic. On one of the closet doors downstairs was "a very unusual brass knob."

In 1851 Mr. Fletcher and his wife, Lucretia N. Fletcher, sold the property to Mrs. Harriet Holcomb Parmelee; and the deed describes it as the home lot on which Mr. Fletcher had resided for several years, with a brick house, barn and outhouse. It was bounded on the west by Main street, on the south by a sadler's shop occupied by a Mr. Elmore; on the east by the DeForest lot, and a lot formerly owned by Theodore Ingersoll and afterwards by Harvey Gibbs, and partly by a lot formerly owned by John M. Eels and afterwards by Deacon Wheat.

Nathan P. Fletcher was a trustee of Oberlin College from 1834 to 1836 and died in St. Clair, Michigan, in 1855. Of the other persons mentioned in the deed we learn that Mr. Elmore also had a harness shop on East College street and that the block in which May's meat market is located, was formerly called the Elmore block. It was burned in 1863. Mr. DeForest also owned a farm just north of what is now the children's home. Philo Weed came from New York in June, 1843, and went into partnership with Brewster Pelton. They sold, first, shoes and tinware, and then tinware and dry goods, and were the forerunners of the leading dry goods and hardware stores found in Oberlin in 1873. They dissolved partnership and Ingersoll opened the first store in Oberlin, in 1834, but two years later moved to Berea. Harvey Gibbs was one of the early proprietors of the hotel He also carried the mail between Oberlin and Elyria, before there was a post office, the volume of mail being small enough so that a leather bag holding a half peck sufficed.

Mrs. Parmelee, to whom the Fletchers sold the property was a widow with a large family of girls and one son. She also had a few student roomers. At the same time she managed a farm near Akron and Barberton, then called New Portage, and so had a housekeeper to help in the care of the Oberlin house. Two of the daughters, Eliza and Martha, graduated from the college, and taught one year in Mercer, Pennsylvania, where Martha met William G. Rose, a lawyer, to whom she was afterwards married. In 1859 Mrs. Parmelee deeded the property to her daughter, Mrs. Rose, and Mr. and Mrs. Rose made this their home for a few years. Later they moved to Cleveland, and Mr. Rose served as mayor of Cleveland in 1878 and again in 1892. He was active in church work and also did some literary work, writing a history of the women of the Western Reserve. A daughter, Mrs. Miller, lived in Cleveland and two sons in New York City.

In 1864 the Roses sold the property to Luther L. Willcutt, who came to Oberlin from Chatham Center. He was one of four partners in a flour and feed store on Water street-now Park street.  The other partners were L. M. Hall, Delia M. Gates, and S. C. P. Gillett. Mr. Willcutt's daughter, Ida, graduated from college in 1879, and it was because of her and also to Mrs. Miller that we are indebted for the early history of the house.  Miss Willcutt lived all her school days in the brick house and remembers no other childhood home. The campus was a favorite spot, and in the orchard back, now part of Willard Court, she used to play Desert Island and Robinson Crusoe. George Steele, who helped to lay the foundations for the conservatory of music, occupied the second floor of the house after his marriage to a nice of Mrs. James H. Fairchild; and their photographs adorned the attic on the third floor, when Miss Willcutt was there. Her home is now in Grand Junction, Colorado.

In 1886 the Willcutts sold to Miss Charlotte M. Steele, daughter of Dr. Alexander Steele and sister of George Steele; and she either occupied it herself or rented it till the time of her death in 1908. At that time it came into possession of Miss Steele's niece, Miss Charlotte Fitch, who sold it in 1912 to the college.

Although the property has had but six different owners, it has been a place of residence for more than that number of persons. Among them was Mrs. Emeline May, mother of Miss Clara May, who lived there in the early 1900's. Hearsay has it that Robert Ingersoll's home was in the house at one time but that we have not been able to verify, though we do know that in the early days his father preached in Sheffield, in this county, and may have made his home in Oberlin. In 1873 it was occupied by J.A. Gray and a Mrs. E.J. Morris; in 1897 by a Mrs. E. C. Finney; and the list could probably be lengthened were there a complete file of Oberlin directories to be consulted. Enough, however, has perhaps been written to lead some one off into further research.