Oberlin Then and Now: Council Hall 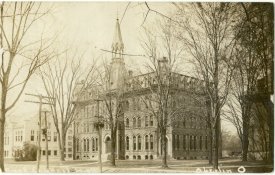 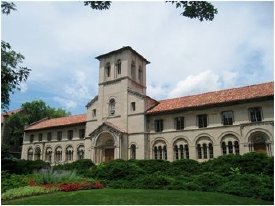 The construction of Council Hall was begun in 1871, and the corner stone was laid at the meeting of the National Council of Congregational Churches, held in Oberlin in November of that year. It was dedicated at the Commencement exercises in 1874, and was opened for use in the fall of that year. The cost, including the furnishing of the private and public rooms, was about $68,000; of this amount $20,000 was subscribed in Oberlin, the remainder being received from many special gifts made for the purpose. The funds for the erection of the building were secured largely through the special efforts of Professor Mead. Mr. Walter Blythe, of Cleveland, was the architect. Council Hall was designed as the home of the Theological Seminary. The first floor contained four lecture rooms, a parlor and reading room, and a chapel. The second, third, and fourth floors contained dormitory accommodations for sixty men. Council Hall was torn down in 1930 to provide the site for the new Theological Quadrangle.