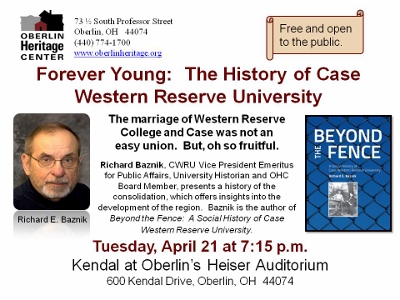 April 21 (Tuesday, 7:15 p.m.) Forever Young: the History of Case Western Reserve University. Western Reserve College was the first permanent college in the Western Reserve of Connecticut. It was a product of the dreams and aspirations of leaders in the region, though they had to temper their religious goals to deal with the politics of the times. Nearly six decades later, and 26 miles northwest of the college's home in Hudson, Leonard Case, Jr. left funds to create a school of applied science in Cleveland. Strangely, it was inevitable that the two institutions would get together one day, but it wasn't easy. Richard E. Baznik (author of Beyond the Fence: A Social History of Case Western Reserve University) presents the story of the two institutions and their eventual consolidation, which also offers insights into the development of the region. Baznik, CWRU Vice President Emeritus for Public Affairs and University Historian is also an Oberlin Heritage Center board member. Free and open to the public. Location: Kendal at Oberlin's Heiser Auditorium.