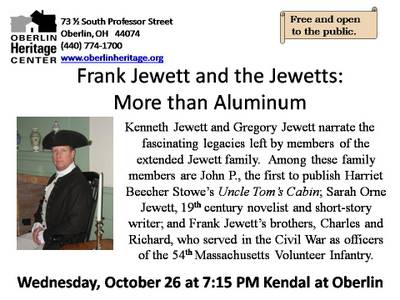 October 26 (Wednesday at 7:15 p.m.)  Frank Jewett and the Jewetts:  More than Aluminum.   Learn about the extended Jewett family whose roots date back to the earliest of America's settlers and include John P. who operated the Jewett Publishing Company, the first to publish Harriet Beecher Stowe's Uncle Tom's Cabin and Jacob R. Shipherd's The History of the Oberlin-Wellington Rescue; Sarah Orne Jewett, 19th century novelist and short-story writer; and Frank Jewett's brothers, Charles and Richard, who served in the Civil War as officers of the 54th Massachusetts Volunteer Infantry, the regiment of free black soldiers whose superior service was made famous by the movie "Glory."

Presented by brothers Kenneth Jewett and Gregory Jewett.  Ken, who makes the presentation in 18th century period costume, is the author (and Greg is his editor) of the "The Valley Series," three fast-paced historical fiction novels, all of which have been nominated for the Pulitzer Prize in American Literature.  Location:  Heiser Auditorium, Kendal at Oberlin.  Free and open to all.