March 19 - Reception for Oberlinian of the Year Jim White 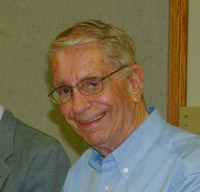 Jim White has been named Oberlinian of the Year by the Oberlin News-Tribune!  As stated by the paper's editor, Jim White wasn't just a great volunteer during the last year.  Jim has been helping the community for many, many years.

A reception in his honor will be held on Saturday, March 19 from 3:30 to 5:00 p.m. at First Church in Oberlin, U.C.C. (corner of Main and Lorain Streets).  This event is free and open to the public and is co-hosted by the Oberlin Heritage Center and the Oberlin News-Tribune in cooperation with First Church.  Join us!

Jim served as the president of the board of the Oberlin Heritage Center from 2005 to 2010 and was instrumental in getting the organization accredited by the American Association of Museums.  "He's been an absolutely marvelous board president in every way," said Executive Director Pat Murphy.  "He's devoted his enire heart and soul into improving our organization.  He's a masterful leader.  He gets everyone engaged, keeps everyone laughing, and gets things done."  He remains on the board as past president.

Jim White had served as director of financial aid at Oberlin College from 1967 to 1990.  The James W. White Award, presented annually in his honor, is awarded to someone who "exemplifies dedication to students, the greater financial aid community, and the recipient's local community."

Jim is very active at Kendal at Oberlin and has served on the Oberlin Underground Railroad Center Implementation Team.  He was a member of Oberlin City Countil for four years, and also served on the board of the Central Lorain County Joint Ambulance District.

He has been active in many community projects, such as the building of SplashZone, the Firelands Association for the Visual Arts board, the North Central Ohio American Civil Liberties Union, Oberlin Cable Co-op, and the Oberlin Schools Endowment Fund.  He is a past president of the Neighborhood House Association, and has served as a trustee for the United Way of Greater Lorain County.

Jim was also nominated for, and received, the Outstanding Individual Achievement Award from the Ohio Association for Historical Societies and Museums in 2010.

Thank you for everything, Jim!