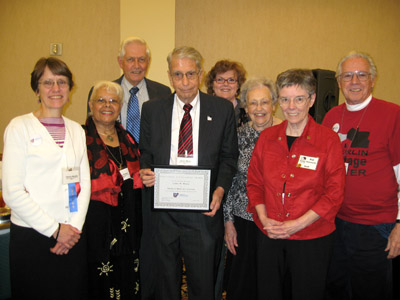 The Oberlin Heritage Center's immediate past-president of the Board, James W. White, has been recognized by the Ohio Association of Historical Societies and Museums (OAHSM) with an Outstanding Individual Achievement Award.  White was among several honorees from throughout the state who were feted at an awards luncheon held at the OAHSM Annual Meeting in Dublin, Ohio on Saturday, October 2, 2010.

The Outstanding Individual Achievement Awards recognize dedication and expertise in the field of local history. Nominees must be involved in a historical organization for at least 5 years, and demonstrate excellence in more than one area of an organization's operations. White has been involved with the Oberlin Heritage since 1996, when he joined as a member of the local history education and preservation group. In 1999, he was elected to the Board of Trustees, where he first served as Secretary and Vice President before stepping into the role of Board President in 2005. Due to term limits, White moved to the one-year position of Past President in 2010, upon the completion of five exceptional terms as President.

As Board President, White helped lead the Oberlin Heritage Center to new levels of excellence for the nonprofit organization. He was instrumental in strengthening the Board of Trustees over the past five years, in seeking and attaining the Heritage Center's accreditation by the American Association of Museums, building the endowment, helping to negotiate arrangements for the donation of the Burrell-King House for use as Oberlin Conservatory of Music's Community Music School, and developing and implementing an ambitious five-year Strategic Plan.

White was nominated by the Oberlin Heritage Center's Executive Director, Patricia Murphy, who commented "Jim White is one of the most remarkable and wonderful people I ever have had the pleasure of working with. He inspires me with his passion and dedication for service to the Oberlin Heritage Center and to the community. He knows more about how non-profit organizations work than anyone I've ever met. I view him as a mentor and a great friend." Murphy's nomination was accompanied by 20 letters of support from Oberlin Heritage Center colleagues as well as from members of the greater community. (A list of those who wrote letters of support is included below.)

In receiving his award, White joins a growing list of Oberlin Heritage Center staff and volunteers who also have been recognized by this statewide association of peers from the museum and local history fields. Pat Murphy received the honor in 1999, followed by Cathe Radabaugh (past president of the Board of Trustees) in 2005, Pat Holsworth (Financial Assistant and former President of the Board) and Dick Holsworth (Honorary Trustee and super volunteer) in 2006, as well as Mary Anne Cunningham (Assistant to the Director) and Prue Richards (Collections Assistant) in 2007. OAHSM has been recognizing individuals with the Outstanding Achievement Award for over 25 years.

Jim White's Nomination for an OAHSM Outstanding Achievement Award was accompanied by letters of support written by: