Oberlin Then and Now: Botany Lane 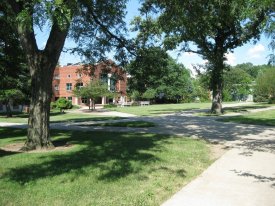 A formal application to secure accommodations for 300 additional single veterans and 50 additional married veterans, together with a messing unit, was voted by the Prudential Committee in December 1945. The trailers were procured through contract with Federal Public housing Administration to accommodate married veterans after World War II. 50 trailers were used for housing out of the “53 temporary structures” mentioned in the Minutes of the Executive Committee, February 16,1946. The installation cost for the trailer camp amounted to $6,390. During the five-year and nine-month period of operations the trailers accommodated 200 families, including 42 children. The Lorain County Division of the State Department of Health took over jurisdiction of the trailer area for the purpose of supervising sanitary arrangements. 46 trailers were sold for a total of $8,301.50. Three were given away, three were torn down, and one was used for sometime for storage in connection with federal hall.