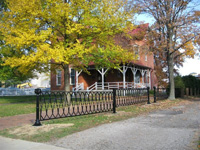 The historic cast iron railings from the Morgan Street bridge are now at their new home at the Oberlin Heritage Center near 73 South Professor Street.

On May 15 (Friday, 5 p.m.) Salute Walt Edling, Dick Holsworth, Bert Latran, Charles Pope, George Clark and all the volunteers who rescued and refurbished the iron bridge railings that topped the Morgan Street bridge for over a century. The railings have now found a happy new use a few blocks from their original location as a fence at the Oberlin Heritage Center. Oberlin High School football team members helped with some of the heavy lifting for this amazing project.

Registrations are welcome but not necessary. Event Calendar

About the Railing Project
Recycling the old for a creative new use, while preserving an important piece of Oberlin history, presented an interesting challenge to a talented team of Oberlin Heritage Center volunteers this summer and fall. In April, the City removed the circa 1880s historic iron railings from the Morgan Street Bridge over Plum Creek, just west of South Professor Street. Fast action by Oberlin resident George Clark prevented the railings from going to the landfill. After the Heritage Center tried unsuccessfully to convince the City to refurbish and reuse the railings on the bridge, the railings were kindly offered to the Heritage Center for a new use. Heritage Center volunteers Walter Edling, Bert Latran, and Dick Holsworth took on the ambitious task of refurbishing the railings to install them as a decorative fence on the south side of the Jewett House on the Heritage Center grounds. Charles Pope later joined this merry band of volunteers who contributed hundreds of hours of volunteer labor and talent. Walt Edling masterminded the impressive project which included manufacturing new center supports. In explaining the necessity of the railings' new supports, Walt remarked that the old ones had been "patched and modified in various ways, resulting in devices that would have gladdened the heart of Rube Goldberg."

The two sections of railings differ slightly; the railing which stood on the north side of the bridge had square tops on the end posts while the south railing had globe-shaped tops on the end posts. As rebuilt on the Heritage Center grounds, the two sections remain separate, with a walkway between. Installation of the handsome railings and cast iron posts was completed on October 31.

Please let us know if you have historical information, photographs to contribute or loan for scanning, or stories of the Morgan Street bridge to add to the historical record.