Oberlin Then and Now: Sturges Hall 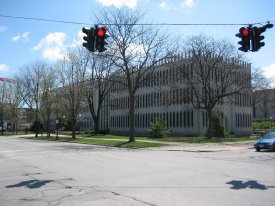 The erection of Sturges Hall was begun in the fall of 1883, and completed in 1884. The total cost was $13,000. The architects were Messers, Coburn and Barnum, of Cleveland. It provides an assembly room on the first floor, and two society rooms on the second. For a number of years after the completion of Sturges Hall it was used primarily as an assembly room for the young women, but since 1907 this assembly room as been used for recitation purposes for large classes in the College of Arts and Sciences. The building was named for Miss Susan M. Sturges, the principal donor. [Sturges Hall was remodeled in 1952 and demolished in 1963 to make way for new Conservatory buildings.]