Oberlin Then and Now: Ladies Hall the Second 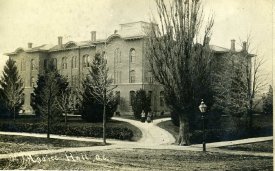 The foundations for the Second Ladies Hall were laid in the spring of 1861, at the breaking out of the Civil War. Work upon the building proceeded slowly. The walls were put up and the building enclosed in 1863. At the Commencement exercises in 1865 the alumni dinner was there served, and it was regularly opened that fall. It was a brick building, three stories in height, located at the southwest corner of Professor and College streets, on the site now occupied by Talcott Hall. The total cost, including furnishings of the private rooms, was $40,000, this amount being secured by gifts made by the alumni for the purpose. The first floor contained parlors, offices, a society room for the women’s literary societies, an assembly room, a reading room, a dining room, and Stewards’ quarters. The second and third floors contained dormitory rooms for one hundred young women. An equal number of young men were accommodated for board. In 1881 a two-story brick addition was built to the western portion of the hall toward the south, and the first floor of the addition was used as a gymnasium for young women, while the second provided additional rooms for dormitory purposes. It was destroyed by fire January 9, 1886.