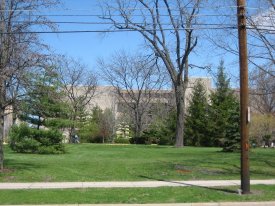 According to a letter published in the Oberlin News Tribune, November 25, 1954, the house was built by Professor Charles Churchill, a member of the College Faculty in 1856-57 and from 1859 until 1897, when he retired. However, Professor Churchill’s youngest son, David Carroll Churchill in the fall of 1960 reported, “The house was standing when my father bought it.” Father bought a 200-foot lot first on West College Street, with a small cottage on it ‘way out in the woods’ as his friends and well-wishers were wont to tell him. “ Around 1860 father sold 75 feet in front of this property to his father in law, Lewis Vance. This piece was sold to the College when grandfather died—around 1880—and Pyle Inn has been built around the old Vance house. Mr. W. P. Davis believes that Professor Churchill sold directly to Dr. G.C. Jameson around 1902, and it was Dr. Jameson’s home for many years. Dr. Jameson died February 29, 1948, and Oberlin College purchased from his Estate. (The deed is dated June 21, 1948. In October 1960, Mr. D.C. Churchill confirmed the fact that his father sold directly to Dr. Jameson, who had rented it for a year. The house was used as a rental property, apartments for faculty members, by the College from the time of purchase until October 1954, when it was removed to make room for the construction of Dascomb Hall. The central portion was retained as the important element of a remodeled dwelling on Gifford Road, just north of Route 10, west of Oberlin.