Oberlin Then and Now: Baptist Church 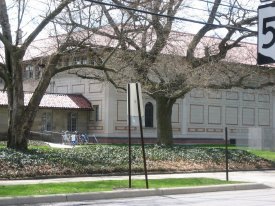 Members began a building on E. Lorain Street on the present site of the Allen Art Museum. The building was used as soon as it was enclosed. Wooden slabs were used as seats and a wooden box for a pulpit. Cotton cloth covered the windows. By December 1869 plaster had been put on the walls, carpeting on the floor and pulpit furniture bought. Eventually the College bought the property and assisted the church in building its present church on East Lorain Street in 1917. The clearing of this land was part of a plan resulting from Charles M. Hall’s will revealed after his death in 1914.

Source: From the Bobbie Carlson Collection of Oberlin Churches, located at the Oberlin Heritage Center