Feb 12 - Five for Freedom: Oberlin's Connections to the Raid on Harpers Ferry

Award-winning journalist, author, and historian Eugene L. Meyer will discuss the five African American men who joined John Brown on his raid in 1859, a venture that they hoped would jumpstart a grassroots revolt and sweep across the country to end slavery. Two of those men, John Copeland and Lewis Leary, were from Oberlin and paid the ultimate price for their participation. Meyer will convey how they came to join Brown, the events of that fateful day, the aftermath, and how the African American participants were treated differently both at the time and by historians.

Meyer's book, "Five for Freedom: The African American Soldiers in John Brown's Army," was published in 2018 and will be available for sale at the Oberlin Heritage Center Museum Store located in the Monroe House or on-line prior to the event, as well as that night. A brief Q&A session and book signing will follow the main program. 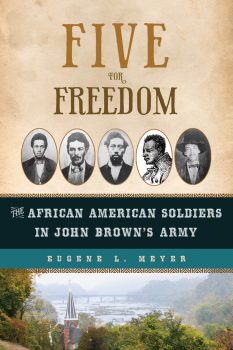