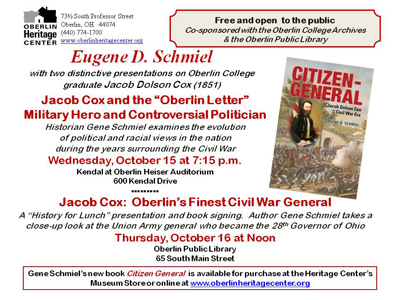 October 15 (Wednesday, 7:15 p.m.) Historian Eugene D. Schmiel presents "Jacob Cox and the 'Oberlin Letter' - Military Hero and Controversial Politician."  Cox, a man with many ties to Oberlin, rose to the rank of general in the Union Army during the Civil War and later served as the 28th governor of Ohio and as U.S. Secretary of the Interior. Schmiel is the author of a new book "Citizen-General: Jacob Dolson Cox and the Civil War Era," which is available in the OHC Museum Store. The event is co-sponsored with the Oberlin College Archives. Location: Kendal at Oberlin's Heiser Auditorium.