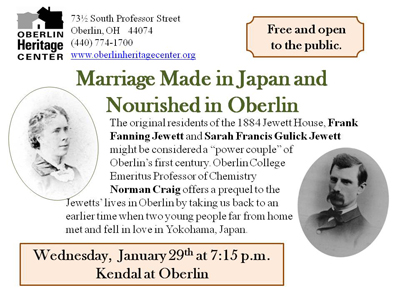 The original residents of the 1884 Jewett House, Frank Fanning Jewett and Sarah Frances Gulick Jewett, were one of the "power couples" of Oberlin's first century. Among his many professional accomplishments, Oberlin College professor Frank Jewett mentored young Charles Martin Hall, who discovered an economically efficient process for making aluminum and founded the ALCOA company. Sarah Frances or "Fannie" was a successful writer and editor of numerous books on public health and hygiene. Both Frank and Fannie were committed to doing good work in the community by being involved in many aspects of civic affairs and Progressive Era social causes.

Oberlin College Emeritus Professor of Chemistry, Norman Craig, offers a "prequel" to the Jewetts' lives in Oberlin by taking us back to an earlier time, in Yokohama, Japan, when two young people, far from home, met and fell in love. The illustrated presentation, "Marriage Made in Japan and Nourished in Oberlin," will both engage and charm the audience. Craig's extensive study of the Jewetts and Hall recently has been enhanced by new information acquired through colleague, Yoshimitsu Miyagi, whose research comes directly from Japanese sources. The event takes place on Wednesday, January 29 at 7:15 p.m. and is free and open to the public. Location: Kendal at Oberlin's Heiser Auditorium (600 Kendal Drive).

Press Release Marriage Made in Japan