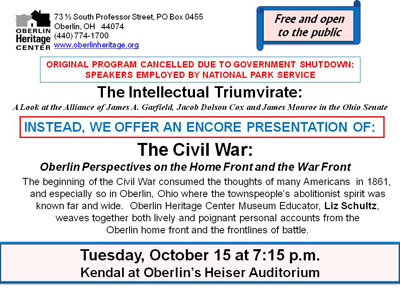 October 15 (Tuesday, 7:15 p.m.)
The program originally planned for the evening has been REPLACED.

"The Intellectual Triumvirate: A Look at the Alliance of James A. Garfield, Jacob Dolson Cox, and James Monroe in the Ohio Senate" has been cancelled due the government shutdown and the guest speakers' positions with the National Park Service.

Instead, the Oberlin Heritage Center is offering anencore presentation of "The Civil War: Oberlin Perspectives on the Home Front and the War Front"

The beginning of the Civil War consumed the thoughts of many Americans in 1861, and especially so in Oberlin, Ohio where the townspeople's abolitionist spirit was known far and wide. Oberlin Heritage Center Museum Educator, Liz Schultz, weaves together both lively and poignant personal accounts from the Oberlin home front and the frontlines of battle.

Three academics. Three progressives. Three State Senators from Northeast Ohio. Beginning in 1860, these men would call from their desks in the Ohio Senate chamber for the abolition of slavery. Garfield, the then on-leave Principal of the Western Reserve Eclectic Institute; Cox, the former Superintendent of the Warren Schools; and Monroe, a professor at Oberlin College, became the intellectual giants of the Ohio Legislature.