March 29 - John Mercer Langston and the Shaping of Af. Am. Education 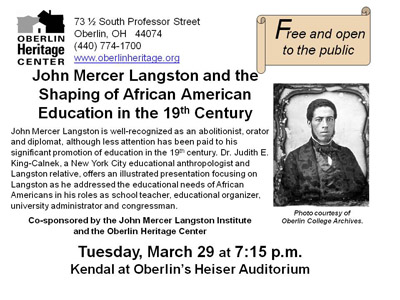 March 29 (Tuesday at 7:15 p.m.) John Mercer Langston and the Shaping of African American Education in the Nineteenth Century.  Many people know of the life and work of John Mercer Langston [1829-1897] as an abolitionist, orator and diplomat, but less attention has been paid to his role in promoting education in the 19th century.  This talk focuses on Langston's work in Ohio and later Virginia and the District of Columbia as he addressed the educational needs of African Americans from his positions as school teacher, educational organizer, university administrator and congressman.  Presented by Dr. Judith E. King-Calnek, an educational anthropologist and instructor at the United Nations International School and a Langston relative.  Co-sponsored by the John Mercer Langston Institute and the Oberlin Heritage Center.  Location: Kendal at Oberlin Heiser Auditorium.  Free and open to all.